In 1999, Paramount Pictures released Double Jeopardy, a movie Wikipedia refers to as “a neo noir adventure crime thriller film.” Directed by Bruce Beresford (who clearly knew his thrillers, having previously directed Driving Miss Daisy), the film starred Ashley Judd and Tommy Lee Jones. As you might expect, it’s a highly entertaining film, filled with suspense, near-misses, and a satisfying conclusion where the plucky heroine triumphs over a dastardly villain. 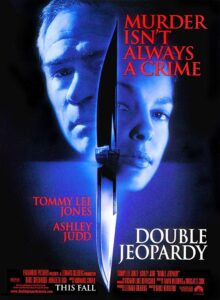 BUT, and this is a big BUT, the entire premise of the film is based upon a deeply flawed and frankly stupid understanding of what “double jeopardy” actually means.

It’s right there in the trailer:

In the movie, the jailhouse lawyer (who is, presumably, taking time away from her thriving practice to volunteer in the kitchen, so she can dispense delicious soup along with legal advice), tells Ashley Judd that since she was wrongly convicted of her husband’s murder (he’s not really dead, it was all an insurance scam, she never really knew him, yadda, yadda…), she is now free to kill him once she’s released. She gets out, stalks him with murderous intent, hilarity ensues.

Think about that for a second. The entire basis of the movie is that if you are wrongly convicted of a crime, you are then given a blank check to commit that crime any time you like. Does that sound like something the law is likely to allow? Spoiler alert: it’s not.

Let me illustrate with an example. Say I’m wrongly convicted of robbing a Duane Reade. I wasn’t actually there and they just confused me with another understatedly handsome and charming bald fellow caught on the store’s security camera. I’m convicted and sentenced to spend a few years in upstate New York. At some point, the real culprit is apprehended and confesses (of course he’s not likely to do that, but just go with it).

When I’m released, I go buy a handgun and go back to that Duane Reade. I point a gun at the cashier and tell her to empty the register. She says the police will catch me and I tell her, “nope. You see, I’ve already been wrongly convicted of robbing this store once, so now I get a freebie. I can rob this story anytime I want and there’s nothing anybody can do about it. Throw a couple of Twix bars in with the cash, would ya?”

If I did that, I WOULD GO TO PRISON. Why? Because there’s no such thing as a freebie when it comes to violent felonies (or other crimes, unless it’s conspiracy to steal an election and obstruction of justice, but that’s another story). Double jeopardy only applies to the same crime – the EXACT SAME crime – same person, same time, same place. If I commit the crime later, or elsewhere, it’s a different crime, and double jeopardy doesn’t apply.

How come a movie that could afford Ashley Judd and Tommy Lee Fucking Jones couldn’t afford 15 minutes with someone who took criminal law in school?

Call me Paramount. Let’s work something out.